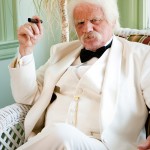 Providing a passport through time for audiences of all ages

Stop by and sit a spell, you wont be disappointed! His political observations are as cutting edge and as applicable in todays world as they were in the second half of the 20th century.

Mark Twain is celebrated as one of America’s great authors and humorists. As the young country rapidly grew into an international power in the second half of the 19th century, Twain shared his observations through writing and speeches. His best known novels are The Adventures of Huckleberry Finn and The Adventures of Tom Sawyer, but his work includes nonfiction, magazine articles, monographs, and commentaries that provide interesting insight into the American story. Mark Twain was the pen name of Samuel Clemens.