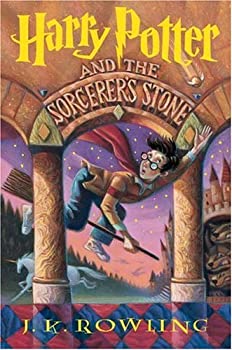 Join us for a lively discussion about,  Harry Potter and the sorcerers Stone by  JK Rowling, Thursday, December 14, 2023 @ 6:00 pm

The main protagonist of the novel is an 11-year-old orphan, Harry Potter. He lives with his abusive aunt and uncle on Privet Drive in Surrey, England. Harry has been told his entire life that his parents were killed in a car crash. However, on the night of his eleventh birthday, Harry learns that he is a wizard. A giant man named Rubeus Hagrid crashes through the door and delivers Harry’s acceptance letter to Hogwarts School of Witchcraft and Wizardry. Hagrid also gives him a birthday cake and tells him about his magical history. Despite the Dursleys’ best attempts to stamp the magic out of Harry and keep him in the dark, James and Lily Potter were two of the brightest wizards of their age. When Harry was a baby, an evil wizard named Voldemort murdered his parents and tried to kill him as well. Harry remembers only a flash of green light and an evil laugh from the night in question. No one quite knows how, but baby Harry survives Voldemort’s attack and causes the dark wizard’s magic to break. Left with a scar in the shape of a lightning bolt on his forehead, Harry Potter becomes known as the Boy-Who-Lived throughout the wizarding world.

Hagrid is Harry—and the reader’s—introduction to the wizarding world. He takes Harry to Diagon Alley, where the young boy discovers that his parents left him a sizable fortune at Gringotts Bank. While they’re at the bank, Hagrid runs a mysterious errand for Dumbledore, picking up a parcel that turns out to be the titular Sorcerer’s Stone. At Ollivander’s, Harry buys his wand. Both Harry and Voldemort’s wands have cores made from twin feathers from the same phoenix. Hagrid gives Harry the first birthday present he’s ever received: Hedwig, a snow-white owl who can carry mail for him. While getting his robes fitted, Harry meets Draco Malfoy, the boy who will become his schoolyard rival. Malfoy’s comments about wizarding families show Harry that prejudice and bigotry exist in the wizarding world. After giving Harry his train ticket, Hagrid leaves.

A month later finds Harry at King’s Cross station, struggling to find platform nine and three-quarters. He spots a family of redheads and follows them through a brick barrier. After boarding the Hogwarts Express with the help of the Weasleys, he becomes fast friends with classmate Ron Weasley. Aboard the train, Harry also meets Hermione Granger, who seems like a know-it-all, and Neville Longbottom, who appears bumbling and clumsy. When they finally arrive at Hogwarts, Professor McGonagall welcomes them to Hogwarts School of Witchcraft and Wizardry. She explains that their houses will be their community and family at Hogwarts. A singing Sorting Hat places all the first years one of four different houses—Gryffindor, Slytherin, Hufflepuff, and Ravenclaw. The houses are respectively known for their bravery, cunning, loyalty, and intelligence. Malfoy is sorted into Slytherin, and Harry begs the Sorting Hat not to place him there. Harry, Ron, Hermione, and Neville are all sorted into Gryffindor.

Harry turns out to be a natural at broom flying, just like his father had been. He becomes the Gryffindor Quidditch team’s Seeker, even though first years are traditionally not allowed to play. Harry has begun to profoundly dislike everything Slytherin, including its head of house, Severus Snape, the potions professor. Snape openly favors the Slytherins and appears to dislike Harry on sight. Malfoy repeatedly schemes to get Harry and Ron expelled, tricking the two boys into breaking curfew. When Hermione tries to stop them, she and Neville both get locked out of the common room in the process. The four Gryffindors run away from Filch, the caretaker, to avoid getting in trouble. They stumble into the right wing of the third floor, where they find a giant three-headed dog guarding a trapdoor. Harry is determined to find out what it is guarding. Harry, Hermione, and Ron do not become friends until after Halloween, when they save her from an attacking troll. Unbeknownst to them, the troll was a diversion created by Quirrell to allow him to sneak onto the third floor. When they see Snape limping, they believe that he was the one trying to get past the dog.

During Harry’s first Quidditch game, he loses control of his broom. Hermione notices that Snape is making direct eye contact with Harry and muttering under his breath. Seeing this, Hermione believes that Snape is cursing Harry and trying to kill him. Hermione rushes over to light Snape’s cape on fire to distract him, knocking Quirrell down in the process. Later, Harry will learn that Snape was trying to keep him safe. The children learn from Hagrid that the dog is hiding something to do with Nicolas Flamel. During Christmas, Harry receives an anonymous present—an invisibility cloak with a note explaining that it belonged to his father. Harry is desperate for a connection with his family. When he uses the cloak that night, he finds the Mirror of Erised. The Mirror is charmed to show the person looking into it their heart’s most desperate desires. Harry sees his parents and extended family in the Mirror.

After much research, the children finally learn about Nicolas Flamel and the Sorcerer’s Stone. Harry is convinced that this magical item that can turn things into gold and grant its user immortality has been hidden at Hogwarts by the headmaster, Albus Dumbledore. Harry and Hermione receive detention after they successfully help Norbert, Hagrid’s illegally owned baby dragon, get picked up and moved to a dragon sanctuary. For detention, Harry, Hermione, Neville, and Malfoy are forced to go into the forbidden forest with Hagrid. There, they come across a cloaked figure drinking the blood of a dead unicorn. From Firenze, a centaur, Harry learns that unicorn blood can heal a person’s body but at the cost of their soul. Harry now believes that Voldemort is the only person who would be after both unicorn blood and the Sorcerer’s Stone.

Harry realizes that it cannot be a coincidence that a stranger just happened to run into Hagrid with a dragon’s egg. Hagrid admits that he told the stranger that Fluffy, the three-headed dog, is easily lulled to sleep with music. The children try to find Dumbledore to warn him that Snape has uncovered how to get past the dog, but they learn from Professor McGonagall that the headmaster is in London. Harry, Ron, and Hermione know they must protect the stone and keep it from falling into Voldemort’s hands. After they get past the dog by playing music, they fall into a tangle of Devil’s Snare. Hermione blasts fire at the magical plant, forcing it to free Harry and Ron immediately. In the next room, the three must ride brooms to catch a flying key that will open the door, allowing them to move to the next test. Next, they find a giant chess board. Ron is the best at Wizard’s Chess and sacrifices himself so they can win the game. Ron is knocked unconscious during the game, so Harry and Hermione move on without him.

They pass a defeated troll before coming to a long table with assorted potions and a note. Hermione is delighted when she realizes that this is a logic test. She picks out the vial of potion that will get Harry through the blaze of magical fire. There is only enough in the bottle for one person. Harry goes on without her, and she turns back to help Ron and alert Dumbledore. In the last room, Harry, expecting to find Snape, is surprised to see Professor Quirrell. Quirrell tells Harry that he was the one who cursed Harry’s broom. He forces the boy to stand in front of the Mirror of Erised before removing his turban and revealing a horrible face grafted to the back of his head. It is Voldemort, living like a parasite, trying to get his physical body back. The Mirror sees that Harry wants to find the stone but does not want to use it, and the Sorcerer’s Stone magically appears in his pocket. Voldemort commands Quirrell to kill Harry and get the stone. Harry’s scar begins hurting when Quirrell touches him, but the professor’s hands have also begun to blister and burn at the contact. Harry faints and reawakens in the infirmary.

Harry is surrounded by gifts from his friends and admirers. Dumbledore is there, and he answers some of Harry’s questions. Dumbledore tells Harry that he survived because of his mother’s love for him. When she sacrificed her life to save him, she left an indelible mark on him that Voldemort cannot break. Therefore, when Quirrell touched Harry and tried to kill him, his body began to burn. Dumbledore sent Harry the cloak, and Harry wonders if the headmaster had been preparing him to face Voldemort this entire time. The Sorcerer’s Stone will be destroyed. After Dumbledore rewards last-minute points to Gryffindor, they win the House Cup. Hagrid gives Harry a photo album with pictures of his family, and Harry returns to spend the summer with the Dursleys.