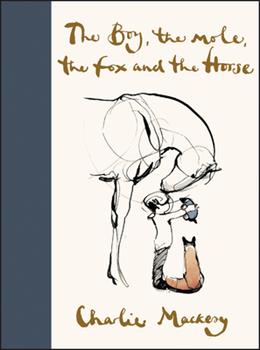 Join us for a lively discussion about the books, You have an option to read  BFG by Roald Dahl, and/or The Boy, the Mole, the Fox and the Horse by Charlie Mackesy Thursday, November 10, 2022 @ 6:00 pm.

Eight-year-old Sophie peers out the window of her orphanage one night and sees something terrifying. A huge, dark shadow is coming down the street. A gigantic hand reaches through the window and plucks her from her bed. She squirms as the giant man holding her hurries to his cave in Giant Land.

Sophie soon discovers the giant isn’t planning to eat her as she’d feared. He is a big, friendly giant (or BFG). Unlike the other nine much larger and more horrifying giants that live in Giant Land, the BFG is fairly civilized. While the others are big, smelly, hairy and wear loincloths, he dresses in regular clothes. While they scour the world each night in search of people to devour, he doesn’t eat humans. But like all the giants, he has a strange, mixed up way of speaking that sometimes baffles the little girl.

The BFG tells Sophie if she wants to be safe, she must never let the other giants know she exists. He feels sad for her as she tells him about losing her parents and the sorrows of orphanage life. She asks him what he was doing in her town, walking the streets at night with a long, thin trumpet and a suitcase. He explains that he can hear things very keenly with his big ears. He can even hear dreams floating in the air. He collects them and, with his trumpet, blows good dreams into children’s rooms at night.

A giant named Bloodbottler enters the BFG’s cave, and Sophie hides inside an unpleasant vegetable called a snozzcumber. Bloodbottler takes a bite of the snozzcumber and spits it out, spewing Sophie across the room. After the unsuspecting Bloodbottler leaves, the BFG cleans Sophie off. The two begin hatching a plan to get rid of the other giants.

One day after being tossed around by the other giants as they would a toy, the BFG takes Sophie with him to Dream Country. He shows her how he catches dreams with his net and bottles them, labeling them so he’ll know what each is about. He even catches one bad dream and gives it to a giant named Fleshlumpeater back home. The giant’s thrashing during his nightmare ignites a brawl between the nine giants but still does nothing to eliminate them.

Sophie suggests they tell the Queen of England how the giants are snatching and eating people. She and the BFG decide to create a dream for the queen. In it, the queen will see giants eating English children. The dream will tell her about the BFG and how he can help her capture the giants. Finally, the dream will reveal a little girl sitting on her windowsill, who will lead the queen to the BFG. Once she awakens, she will find Sophie on her windowsill and know the dream was true. The giant mixes many dreams together to get just the right story for the queen’s dream.

The plan goes off without a hitch, and the surprised queen allows Sophie to introduce her to the BFG. After the queen makes arrangements for Sophie and the BFG to have breakfast with her, she calls a few other countries to confirm that they, like England, have had groups of humans go missing in the past few days. She is convinced the BFG’s story is true.

The queen sends her military with nine helicopters to follow Sophie and the BFG to Giant Land. The sleeping giants are tied up and carried by helicopter back to England, where an enormous pit has been dug to contain them. The BFG brings his collection of dreams back to England with him, as well as a bag of the horrible snozzcumbers. He says he will help the royal gardener grow them so the giants can eat them forever.

World leaders send gifts of thanks to the BFG and Sophie. The queen has a special home built for the BFG and a cottage next door for Sophie. The BFG also gets a special room for storing his dreams, and people all over the world write him letters asking him to visit them. Tourists come at feeding time to hear the giants eat their snozzcumbers. The only tragedy occurs when three drunk men climb over the safety fence and fall in to the giant pit. Sophie teaches the BFG to read and write properly. As the book ends, readers discover the author is the BFG.

The Boy, the Mole and the Fox Summary:

The Boy, the Mole, the Fox and the Horse is a children’s graphic novel by Charlie Mackesy. As a graphic novel, the pictures and text work together to tell a story about friendship and acceptance. Four unusual friends — a boy, a mole, a fox, and a horse — share truths about life as they search for home. They have still not arrived home at the end of the book. However, the boy has learned that home is not always a place.

The book opens with the boy and mole greeting one another and becoming friends. The boy tells the mole that even though the mole is small, he is important. They begin their search for the boy’s home. The mole advises the boy not to be afraid of the wilderness they are about to enter.

In the wilderness, the boy and the mole find a fox who is caught in a snare. The fox warns the mole that he will eat him, but the mole knows the fox will die if he is not released from the snare. When the mole chews through the wire holding the fox, the fox does not kill the mole. Instead, he creates the shape of a heart with his footprints in the ground.

As the group, now consisting of the boy, the mole, and the fox, continue to travel, they cross a stream. The mole falls into the stream and is saved by the fox. A horse joins the group of friends. While the boy is riding the horse, he falls off. The horse tells him that it is okay to be afraid, that tears are a sign of strength, not weakness.

The horse admits to the boy that he can fly, but he stopped because it made the other horses jealous. The boy tells the horse that they love him even if he cannot fly. Even as the boy is speaking, pictures show wings growing on the horse’s back. The boy rides the horse as it flies.

The group of friends encounters a storm. The horse advises them to concentrate on love, that the storm will pass. As they later watch a shooting star, the boy comments that home is not always a place. The boy kisses the horse and thanks him.